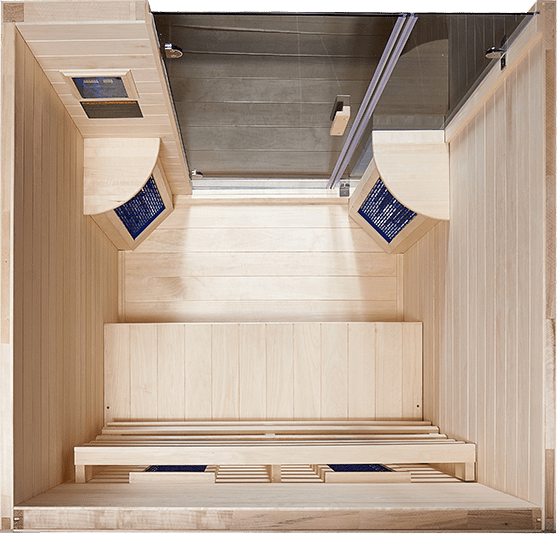 You’ve seen it… the flashy ad claiming that one sauna brand is better than another because of some specific feature right?  We all have, they’re rampant in this dark industry, but lets cover some facts before we get too crazy here.

Healthmate used to make High Tech Health saunas, or vice versa. I don’t know, you get conflicting stories from different folks. But this isn’t 2010 anymore, it’s 2020. All we care about, is which product lives up to the advertising claims the most when evaluating our home sauna purchase right now!

Which Is Better: HighTechHealth Or Health Mate?

Did I say very enough? hah

They’re both ceramic emitter powered infrared saunas, so it’s not like an apples to oranges comparison on the surface temps like with a carbon sauna.

Both gave me a great sweat. Both tend to heat up just like any ceramic sauna… a little bit slow, then builds strong heat once to operating temps.

But generally because the surface temperature of ceramic emitters is hotter, you can’t sit with your back less than an inch from them anyway… so they add spacious grill coverings to increase the distance between your skin and the heater. Thus, registering a bit lower emf wise than if you were on top of it like in a carbon sauna. That said, a lot of carbon saunas are lower emf even taking this into consideration.

All that considered, both saunas are effective and I believe the benefits of using far infrared saunas far outweighs the cons. I’m just tired of companies falsely advertising their products, and sauna sales people saying things they have no business saying when they haven’t even tried all the brands (or at least have them in their office).

HealthMate VS High Tech Health EMF (is not the same)

Some of this technical jargon is so confusing, a scientist at NASA wouldn’t even be able to figure out which sauna to buy for their house. Seriously.

When it comes down to it, we have an internet full of people that make sauna claims, but have never used both sauna brands when doing comparisons. Everyone has something to sell you these days, including me. The difference in what I do, is just tell you my opinion from how the saunas test and FEEL… from actually using them.

I’ve said it for 3 years, if you don’t see the person telling you “facts” about more than one sauna brand physically sitting inside both of them, that is a huge red flag.

Bottom line on Healthmate and High Tech Health heater emf, is that there is a reason one of them is on the Certified Sauna list, and the other is not. One company makes a true low emf sauna, and the other makes a low’ish magnetic field sauna, but leaves the electric fields wide open.

This leads to a high body voltage sauna, which is not really low emf. What does emf stand for? Electro-Magentic Fields. That’s two things. When are companies going to start being honest about it, and stop falsely advertising the products?

The backpaddling to “Oh well the WHO says that magnetic fields are worse than electric. And there isn’t any scientific studies done yet that conclude that electric fields are as harmful as magnetic.”

Okay, then stop calling those saunas Low EMF then, right?

If I had to pick one brand over the other today, it would be the High Tech Health.

Same style, not sure about pricing differences for this year, since High Tech Health dropped their lower priced model line. Both are expensive in my book, compared to the average cost of an infrared sauna in 2020.

The Healthmate isn’t far behind though, and they could always update the product next year. However, both saunas are going to feel relatively the same. Similar heater type, despite differences in fancy names for them, they feel much the same. (like practically identical!)

The wood type isn’t a concern, so even though the High Tech Health people will try to sell you on having Poplar hypoallergenic wood is a MUST-HAVE in your sauna purchase… I do not agree with that, and personally think it’s BS.

Same goes for Cedar though. Other companies like Clearlight LOVE to sell you on the idea that Cedar is the wood of choice in any dry sauna. Really? So tell me, how does the wood in a dry sauna become more mold resistant? (dry saunas don’t have any moisture in them to begin with, other than your sweat… it’s a non issue, and a bunch of nonsense.)